Murray Hill Veterinary Associates welcomes you and your special pet to our full service hospital in New Providence, NJ. Our twelve veterinarians and our well trained staff members are committed to maintaining the highest standard of compassionate medical and surgical care for your dogs, cats, small mammals, birds, reptiles and amphibians. 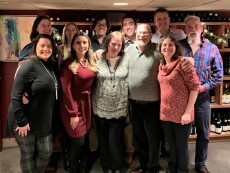 Cully the Vizsla is ready for his buff and polish.

Dr. Heacock asks Eloise if she looked both ways before she crossed the road.

Jack takes a walk on the wild side

Leo and Cleo have little time for bears.

Mable-Bean puts on her happy face.

Max feels color is so overrated. He prefers classic black and white.

Moses the puppy and Kata give their full attention.

One of these Tibetan Terrier puppies is not like the others.

Pepper the guinea pig is 50 shades of cute.

Philomena is right at home with the plush animals.

Found on Hallowe'en, Pumpkin the kitten sends greetings from the patch.

Raleigh the kitten has a nose for nature.

This may be Sammy Murphy's last exam on rather than beside the table.

Wilson is all ears.

Zoey the Labradoodle is ready for her joy ride while Seamus already has his turn signal on.